This is a really cool video I just uploaded from a Motocross Grand Prix in Japan in 1986. In it, you can see Americans Ricky Johnson, David Bailey, Micky Dymond, Erik Kehoe, Jim Holley and George Holland doing battle against the top Japanese racers of the day.

Back in the eighties, it was not uncommon for the best US riders to go to Japan and race in one or two Grand Prix or National races. The Japanese brass loved to see the riders they were paying for in person and it was great PR to have their riders come to Japan and win.

In this vid, you can see amazing battles between George Holland and Micky Dymond in the 125 class and another one in the 250s between Honda teammates Ricky Johnson and David Bailey. If you stick with it past the somewhat cheesy eighties music at the beginning, you will be rewarded with some badass two-stroke music in the motos. 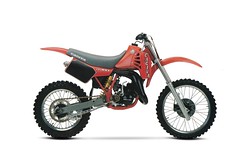